One afternoon in the spring of 2009, Jon Meacham sat in front of the freighted wooden bookshelf in his office and talked to me about a job writing for Newsweek.

I was by then not so sure about the future of print, but Mr. Meacham, the magazine’s editor in chief, told me that his corporate masters had a plan: Newsweek would rid itself of most of its existing, middlebrow subscribers and charge the remaining ones more for a highbrow product. The plan didn’t make much sense to me and, obviously, did not work. The next year, Mr. Meacham, once described as the “oldest 34-year-old journalist in the world” (this was praise in the world of newsweeklies) — left to write and teach at Vanderbilt.

So suffice it to say that if you’d asked me earlier this year who would be the most politically relevant American writer of 2020, I would not have picked Jon Meacham.

But Joe Biden did. The former vice president won the presidency despite reporters’ bored skepticism and editorial board snubs. And Mr. Meacham, a Pulitzer-winning historian whose books have lionized figures like President George H.W. Bush and Representative John Lewis, is the media figure he’s closest to, an occasional source of historical advice who helps with his biggest speeches. (This revelation cost Mr. Meacham a formal MSNBC contributor job when it was reported in The New York Times this month.) Mr. Meacham’s surprising turn at the center of American politics is a reflection on Mr. Biden’s relationship with the news media, one very different from his predecessor’s, and a hint at the future.

“Is Donald Trump’s transformation of the presidency into a reality show permanent? Or can President Biden govern with stability and even dignity amid a media climate that tends to value chaos over problem-solving?” Mr. Meacham, who declined my request for a full interview, asked, in a letter written with a fountain pen and delivered to my home by a boy on a horse. (No, it was an email, but you get the idea.) He wrote that he thinks that “Biden has a good chance to pull this off by focusing on the realities of the moment and making things about the people, not about himself.”

Joe Biden has been around so, so long that many people may assume he has an equally long, warm relationship with the Washington press corps, the sort of backroom intimacy depicted in “The West Wing” and “House of Cards.” But Mr. Biden shares one thing with Donald Trump: He spent most of his career as a bit of an outsider to Washington’s social world, his face pressed against the glass. The cool kids, including President Barack Obama, occasionally mocked him behind his back for his cornball earnestness.

Mr. Trump’s obsession with the media took the form of constant, obstreperous complaints and news-making leaks, a style Mr. Biden has suggested he finds merely embarrassing. Mr. Biden sought their approval with a more diligent and solicitous approach. As vice president, for instance, he was particularly attentive to the wise men of Washington, especially the foreign policy columnists David Ignatius of The Washington Post and Thomas L. Friedman of The Times. Mr. Biden liked nothing more than a wide-ranging, high-minded conversation about world affairs after he had returned from a trip to China or India.

It seems that what Donald Trump did for the once-dying industry of cable news, Joe Biden may do for the dusty old newspaper column. What a time to be George Will!

But what of the working reporters in the White House? Most of the writers in that group are generations younger than the 78-year-old Mr. Biden. They may not have read all of Mr. Meacham’s books. And the president-elect appears to have learned from his campaign that he can mostly ignore the news media and sneer at Twitter.

He also has the advantage that Mr. Trump has so raised the bar on presidential scandals and gaffes that even his loosest talk or most questionable hire may not scandalize. But Mr. Trump has also gotten us all used to an extraordinary, if inadvertent, level of transparency. He rarely resisted answering shouted, timely questions, and his leaky White House offered journalists and their audience an X-ray portrait of a government running off the rails. The internet, meanwhile, is noisier and even more polarized than when Mr. Biden and Mr. Obama left office four years ago.

A former Obama aide, Tommy Vietor, recently advised Mr. Biden to focus on going directly to social media and to work closely with friendly left-leaning online outlets. “Give them scoops and access,” he wrote, “and grow their audiences and influence the way Trump’s team has nurtured fringe rags like Newsmax and OAN,” a reference to One America News.

That doesn’t sound like the Biden playbook. In fact, when I told Shailagh Murray, a former senior adviser to Mr. Biden, that I was writing about Mr. Biden and the media, she asked why. He’d always been so by the book, working through staff members, pretty much the same to reporters as everyone else. “I mean, it’s important … but boring,” she said of this column.

It wasn’t always boring. The only place to start is a legendary 1974 profile of then-Senator Biden in Washingtonian by the future celebrity biographer Kitty Kelley, “Death and the All-American Boy,” which goes viral every time it is posted to Twitter for a level of openness that is still shocking in 2020. He’s aware of others’ fascination with him, a handsome 31-year-old senator whose wife had just died and is raising two boys as a suddenly single father. He is startlingly open about how he dresses, about every aspect of his relationship with his late wife, about the woman he’s dating — a Capitol Hill reporter from The Fort Worth Star-Telegram, Francie Barnard. “Why should someone like Francie marry a guy like me who is still in love with his wife?” he asks Ms. Kelley. (Ms. Barnard died last year at age 73. Her obituary takes note of her journalism, a gender discrimination lawsuit and four marriages, one to Bob Woodward.)

It was all a bit much in 1974, and Mr. Biden later said he felt like a “sucker” for telling all. He never opened up about his personal life to a reporter quite like that again, though he allowed one, Richard Ben Cramer, deep inside his political world during the 1988 presidential campaign. And Mr. Cramer turned Biden’s noisy, hectic internal monologue, his family loyalty, his spaghetti binges and small-time real estate deals that never quite made him rich, into the most memorable chapters of the 1992 classic “What It Takes.” There, Mr. Biden was “a wild stallion who’d never felt the bridle,” with a gift for “the connect” but a maddening lack of focus.

Many politicians would be wounded by that kind of depiction. But Mr. Biden doesn’t really seem to hold grudges. He has given as much time to The Times columnist Maureen Dowd as any other journalist in recent years — even though she exposed the plagiarism that helped scuttle that 1988 campaign. And he absorbed Mr. Cramer’s portrait and even seemed to allow it to shape his public identity. 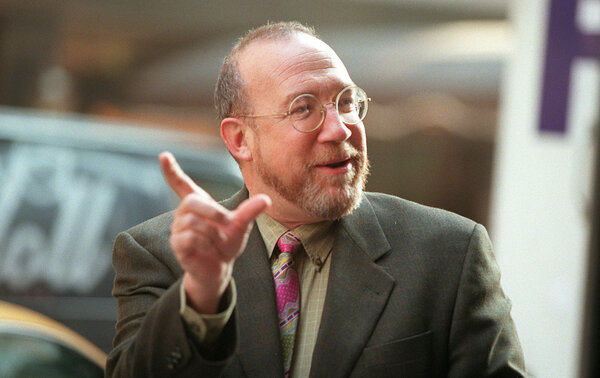 “So that’s how people see me?” Mr. Cramer recalled in a 2010 interview about how Mr. Biden marveled to him. When Mr. Cramer died in 2013, Mr. Biden remarked on the sensation of finding “both the observations and criticisms so sharp and insightful that you learn something new and meaningful about yourself.”

Through his decades in Washington, Mr. Biden developed a reputation as someone who would talk your ear off about judicial nominees or his plan to divide Iraq into three parts, but not one who would, à la Senators Lindsey Graham or John McCain, invest more deeply in relationships with Washington journalists. He is, that is, a talker, not a schmoozer.

During the Obama years, Mr. Biden’s staff invited establishment columnists to his residence at the Naval Observatory for lunches, where he served as a background source for stories about President Obama’s strategy around the world and on Capitol Hill. He also gamely allowed his staff to shape an online persona of him on Facebook and Twitter that was a cleaned-up version of the Trans Am-washing, shirtless Onion Joe Biden — this persona drove a Corvette instead — without ever developing a personal fluency with social media.

But it misreads Mr. Biden to see him as either a true insider or a media operator with anything like President Trump’s grasp of individual reporters’ needs, his instinct for when to call journalists or their bosses and his shrewd shaping of his own image. On the campaign trail, much of the news on the Biden beat came from NBC’s mild-mannered Mike Memoli, who has covered Mr. Biden since 2008 — but who never got the sort of free-ranging access and wide-open interviews that Mr. Obama granted Mr. Friedman (a golf partner) and The New Yorker’s David Remnick, or that Mr. Trump gave a rotating crop of Fox News hosts. Mr. Biden’s moments of connection to journalists have come in the same way they do to many people — a phone call about a relative who has died or a child who has fallen ill.

Mr. Meacham’s work may offer a bit of a clue as to how Mr. Biden, who interviewed the historian for more than an hour at the University of Delaware in 2019, will handle reporters in the West Wing. Mr. Meacham’s work is aimed at the big picture and toward a conservative form of narrative — heroic leaders and patriotic themes — that depicts America confronting big challenges like the civil rights movement of the 1960s and choosing the liberal path. It’s a bit hard to see how those sepia tones and stirring themes would play in a White House communications office putting out a thousand fires a day at the speed of Twitter. But Mr. Meacham, who has told associates he does not expect to join the administration, sees virtue in past presidents who were able to look past the pressure from the media of their days.

In “Destiny and Power,” his sympathetic, all-access biography of George H.W. Bush, Mr. Meacham recalled President Bush’s subdued public reaction to the fall of the Berlin Wall in 1989. “The press gets all over me. ‘Why aren’t you more excited?’ ‘Why aren’t you leading?’” the president wrote in his diary.

To Mr. Bush, the answer was obvious: He didn’t want to destabilize the Soviet leader Mikhail Gorbachev, and some bad press was a small price to pay. If he’d declared victory, he wrote, “You would’ve had chaos, and the danger of military action, bloodshed, just to make a few critics feel good — crazy.”

It’s an older set of values, and one that has already frustrated some of President-elect Biden’s supporters as he forgoes a full-throated confrontation over President Trump’s refusal to concede and delivers without fanfare a stream of appointments and an online transition fund-raiser.

The question now is whether the electorate and we in the media can break our addiction to the Trump news cycle.