We’re covering a new Asia-Pacific trade pact covering 2.2 billion people, a domestic abuse case in China that is prompting calls for action and the countdown to the SpaceX launch. 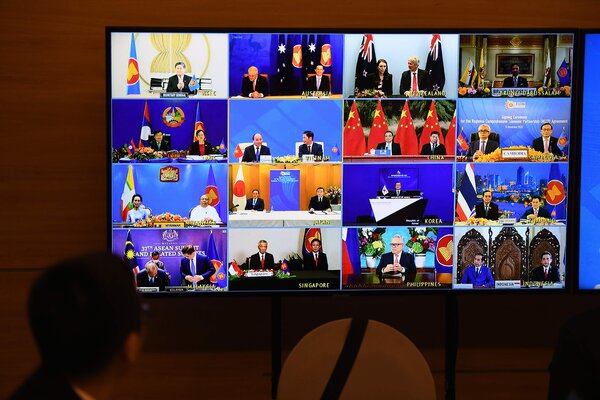 China and 14 other nations from Japan to New Zealand signed one of the world’s largest regional free trade agreements on Sunday. The pact, which took eight years to negotiate, could help further cement China as the dominant economic power in its neighborhood.

The Regional Comprehensive Economic Partnership covers 2.2 billion people — more than any previous regional free trade agreement. It comes after a retreat by the U.S. from sweeping trade pacts, like the Trans-Pacific Partnership rejected by President Trump.

The pact does not include India, a conspicuous omission. The New Delhi government pulled out of talks in July after China rejected its demands for a more ambitious arrangement.

Context: To some trade experts, the agreement shows that the rest of the world will not wait around for the U.S. As other countries sign new deals, American exporters may gradually lose ground.

Details: The pact will most likely formalize, rather than remake, business among the signatory countries. Its so-called rules of origin will set common standards to determine whether a final product qualifies for duty-free treatment, potentially making it simpler for companies to set up supply chains in several different countries.

An adviser to President-elect Joe Biden said the country was “in a very dangerous period” as U.S. officials reported more than 11 million cases of coronavirus as of Sunday — by far the world’s biggest caseload.

The country logged more than 159,100 new cases on Saturday — the third highest total of the pandemic — raising the new seven-day average to more than 145,000.

The pandemic continues to take a disproportionate toll on Americans of color, who have been hospitalized at rates roughly four times as high as non-Hispanic whites since the start of the health crisis.

Here are the latest updates and maps of the pandemic.

Hong Kong is making coronavirus tests mandatory for travelers and other high-risk groups as the Chinese territory works to prevent a fourth wave of infections. Those who ignore orders face possible jail sentences.

Mexico has exceeded a total of one million coronavirus cases, the 11th country to do so.

Soumitra Chatterjee, the Indian actor with more than 200 movies to his name, died on Sunday of complications from the coronavirus. He was 85.

Lhamo, a Tibetan farmer in southwestern China, posted videos of herself cooking, singing and picking herbs on social media. Her followers were watching her livestream from her kitchen one evening when a man stormed in and she screamed. Then the screen went dark.

Ms. Lhamo died two weeks later. Her ex-husband is now under investigation, accused of dousing her with gasoline and setting her on fire.

The case, one of several involving domestic violence that have gained attention this year, reflects the shortcomings of China’s legal system in protecting women — even when they repeatedly seek help, as Ms. Lhamo did. Public outrage has helped some get justice.

A new movement: One day after Ms. Lhamo’s death, Xi Jinping, China’s top leader, told a U.N. conference on women that the “protection of women’s rights and interests must become a national commitment.” The Chinese internet seized on the speech. People were calling for stronger enforcement of a domestic violence law using the hashtag #LhamoAct. Other hashtags such as #StopNotActing condemned the failure of the police to prevent Ms. Lhamo’s death.

If you have 6 minutes, this is worth it

How a rights hero lost her global stature

Daw Aung San Suu Kyi’s party won a landslide in Myanmar’s recent elections, setting up five more years in which she will share power with the military that has ruled the country for nearly 50 years. Above, supporters celebrating in Yangon on Nov. 9.

She remains popular at home, yet it is hard to think of a human rights hero whose global prestige has diminished so quickly. Our reporter looked at her shift from democracy icon to defender of a military accused of genocide.

Here’s what else is happening

U.S. elections: President Trump appeared to briefly acknowledge for the first time on Sunday that Joe Biden had defeated him, but he reversed himself less than two hours later, insisting that “I concede NOTHING! We have a long way to go.”

John Paul II, reconsidered: The former pope was fast-tracked for canonization immediately after his death. But a tarnished legacy in dealing with the church’s sex abuse scandals left critics to wonder whether it was too fast.

Space X launch: A rocket is scheduled to blast off from Florida in the coming hours with a capsule carrying four astronauts — three from NASA, and one from JAXA, the Japanese space agency — to the International Space Station. It will be the second such Space X mission after a May launch and the return of two astronauts to Earth in August.

Nagorno-Karabakh: After a deal brokered by Russia ended weeks of fighting between Armenia and Azerbaijan, Armenians are packing up and burning their houses as they retreat from areas near the enclave while Azerbaijanis plan a return to long-lost lands.

Snapshot: Above, Jeon Deuk-soon riding her mobile refrigerator used to sell yakult, a drinkable yogurt, in Seoul. The “yogurt ladies” have helped to establish South Korea’s taste for dairy and have become pop culture celebrities.

What we’re reading: This Twitter thread, surfaced by our Styles reporter Taylor Lorenz. “Somebody, somewhere, made a joke about turning the animated movie ‘Ratatouille’ into a musical,” said Andrea Kannapell, the Briefings editor, “and this collects some of the amazing young talent coming up with songs.”

Now, a break from the news

Cook: This buttermilk-brined roast chicken is inspired by the Southern grandma method of marinating chicken overnight in buttermilk before frying it.

Listen: Billie Eilish’s “Therefore I Am” and tracks by Foo Fighters, Valerie June and Chris Stapleton make up our pop critics’ latest playlist.

Do: Take a virtual tango lesson, or tour Japan’s stores by phone. As travel begins to tick up, experience companies are adapting to social distancing in new ways.

Get your week off to a good start. At Home has ideas on what to read, cook, watch and do while staying safe indoors.

And now for the Back Story on …

A ‘little rejoicing’ from our pandemic reporter

Donald G. McNeil Jr., one of our science and health reporters, has been at the forefront of The Times’s coverage of the coronavirus. He spoke to Times Insider about prospects for a vaccine and the latest surge in cases in the U.S. and in Europe.

There’s a lot of optimism around Pfizer’s announcement last week, which suggested its mRNA-based vaccine could be more than 90 percent effective. What should we make of this? Is it too soon to rejoice?

No, I’d say a little rejoicing is in order. The F.D.A. has said it would accept a vaccine that was only 50 percent effective, which is worse than some year’s flu shots, so everyone’s expectations were lowered. This is pretty great. Plus, we were already pretty sure that mRNA vaccines would be harmless. With this type of vaccine, you’re injecting just a short stretch of the virus’s genome packed into a tiny ball of fat with a mild electric charge. In contrast, some vaccines use a whole virus that is killed or weakened and is more likely to cause bad reactions.

Pfizer actually said its vaccine is at least 90 percent effective. We need to be cautious: That was its news release, rather than the actual data, which scientists will want to examine. But I’ve read previous news releases from Big Pharma companies and compared them to the data issued later, and they’ve been honest.

What’s your view on the efficiency of lockdowns, and what’s the appropriate balance to strike for economic sustainability, mental and emotional well being, and health in terms of the virus?

We need to stop thinking of lockdowns as if they are an end in themselves. A really harsh lockdown — in which people are literally ordered to stay home — pauses transmission long enough for you to launch real tools: rapid accurate testing, rapid contact tracing, isolation of infected people away from their families, and so on. China did that. New Zealand did that. But we never had any of that in the U.S. Our “national lockdown” in the spring was a joke.

That’s it for this briefing. See you next time.

Thank you
To Theodore Kim and Jahaan Singh for the break from the news. You can reach the team at [email protected]

P.S.
• We’re listening to “The Daily.” Our latest episode is about President Trump’s refusal to concede.
• Here’s our Mini Crossword, and a clue: One side of the Pacific (four letters). You can find all our puzzles here.
• Azam Ahmed, who became our Mexico City bureau chief in 2015, won the Michael Kelly Award for covering the brutal cycles of violence afflicting Latin America and the Caribbean “with deeply felt humanity.”