Bret Stephens: Gail, you sometimes write columns asking readers to vote for the worst members of the Trump administration. With that in mind, what are your candidates for the worst moments in the Trump presidency? His behavior since Joe Biden became president-elect has got to be in the Top 5. What else?

Gail Collins: Bret, we have to start from the very first day, when Trump obsessed about proving his inauguration crowd was bigger than Barack Obama’s. Which, of course, it wasn’t. But it did set a trend: the administration was going to focus on stupid things and propose phony new versions of history. Or medicine. Or any kind of reality.

Gail: Your next nominee?

Bret: The child-separation policy was definitely the administration’s single most disgraceful policy. Cruel, reckless and stupid — like Trump himself. I’d place that in the same basket of deplorable acts alongside the Muslim immigration ban, his accusation that Democrats want illegal immigrants “to pour into and infest our country,” and his drastic reduction of the number of refugees admitted into the country.

We’re still only scratching the surface, Gail. What’s next on your list?

Gail: Gonna go with coronavirus. No idea how well a normal administration would have done in containing it, but history will remember Trump as the president who pooh-poohed a pandemic.

Bret: … while suggesting that Americans inject themselves with disinfectants as a way of beating the virus.

Bret: We also can’t ignore the foreign policy hit parade. Exchanging “beautiful” letters with Kim Jong-un. Taking Vladimir Putin at his word on the question of Russia’s election interference. Strong-arming the president of Ukraine to provide political dirt on the Biden family. Asking Xi Jinping’s help to get re-elected. Calling NATO into question. Maybe one of our clever readers can set all this to the tune of Billy Joel’s “We Didn’t Start the Fire.”

What bothers me most of all, Gail, is Trump’s serial trashing of political norms, which wasn’t so much a moment as it was a constant. He’ll be remembered as the president who treated every civil servant as a personal servant, every cabinet secretary as a toady, every critic as an enemy, every enemy as a role model and every supporter as a fool. That’s why we’re nearly as freaked out about him now as we were before the election.

Gail: And hey, I wanted to thank you for all your reassurance about his departure. We’ve been hearing a lot of yelps from the Trump camp, but no effective legal challenges. You told me he was too much of a coward to fight, and you were right.

Bret: Again, fingers crossed. Firing his secretary of defense was, um, disturbing, even if it was done out of pure spite.

Gail: Yeah, nothing’s going to protect us from a couple of months of complete craziness.

Bret: I see two options. One is that Trump just decamps to Mar-a-Lago and basically quits being president so that he can raise money for his political action committee and start a media company to compete with Fox News. The other is some combination of weird and scary. Seeing anything in particular in your crystal ball?

Gail: I wouldn’t dismiss the Mar-a-Lago scenario. Rather than come to grips with losing he could just retreat to his safe place and avoid reality altogether.

Bret: Good. He can become that guy writing irate letters to the columnists he loves to hate.

Gail: Pretending nothing’s happened might be better than going through nine weeks of tantrums and tirades. But I’m really freaked out by his refusal to let Biden have any briefings — or even a desk in the basement. 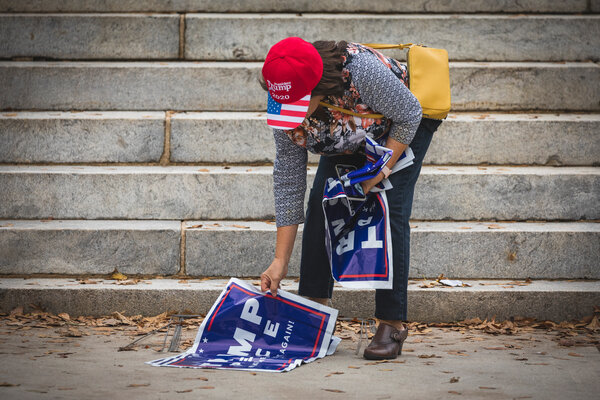 Bret: I know you weren’t George W. Bush’s biggest fan, but Barack Obama and his team gave the outgoing Bush administration high marks when it came to ensuring a smooth transition. It’s just another way in which Trump makes all of his predecessors, with the arguable exception of James Buchanan, look good.

Bret: But let’s get off the subject of the current president and turn to the next one. So far, I think Biden has been conducting himself wonderfully. He’s sticking to his core message of unity, seriousness, moral sobriety. I suppose he’s thinking that he’ll probably have a Republican Senate to deal with come January, and so he’s going to have to be smart about achieving some bipartisan legislative victories. Where should he start?

Gail: Well he’s got to come up with a new Covid relief package. Which will have to include a heck of a lot of aid for beleaguered cities and states, unless we want to go through yet another economic collapse.

Bret: That could be the first big fight with Mitch McConnell, whose attitude will be very much in the spirit of Jerry Ford’s message to New York City in the days of Mayor Abe Beame: Drop dead.

Gail: Yeah, we know how great McConnell was at making sure Kentucky always paid more in taxes than it got back in federal aid — hahahaha. But how about you? I know you’re pretty pleased right now, but when do you think we’ll come to our first big parting of the ways of the Biden era?

Bret: Probably when he tries to re-enter the nuclear deal with Iran. Or if he names Bernie Sanders as his secretary of labor or Elizabeth Warren as secretary of the Treasury. I’m sure there will be something — we already agree far too often as it is.

Gail: So true. On everything from Donald Trump to good red wines.

Bret: I have a good Barolo waiting for your next visit. But I have a hard time imagining that anything Biden will ever do as president will fill me with the kind of visceral loathing I feel for Trump. There’s a difference between disagreement and disgust; between thinking a politician is taking the wrong route to the right destination and thinking he’s taking an insane route to a horrible destination.

Gail: So we’re moving from mutual disgust to partisan disagreement. The whole country can start doing that: Think how happy people will be sniping with their relatives over the holidays about Medicare for All.

Bret: That would be progress. I also think that a Republican Senate might prove to be a blessing in disguise for Biden. It will nip in the bud some of the Democrats’ worst policy impulses, like adding seats to the Supreme Court, while giving Biden an incentive to look for policy openings where he can find some bipartisan cooperation.

Gail: Well, this solves the problem of our agreeing too much. Having a Republican Senate means Biden doesn’t get to do anything he ran on except not being an awful human being. Which is nice, but we deserve a little bit more.

Bret: Did Biden really run on anything other than being a decent guy? I’m betting he can pick up four or five Senate Republicans for the sake of comprehensive immigration reform, which would be a massive accomplishment, or even push for a carbon tax with some kind of income-tax offset.

Gail: That’d be fine by me, as long as that income-tax offset is for the middle class. But I am completely lacking in your confidence those rogue Republicans will take a stand on anything important.

Bret: All Biden needs is a small group of moderate Republicans like Susan Collins, Mitt Romney, Lisa Murkowski and Ben Sasse. And then there’s health care …

Bret: Hang on! You’re not in favor of abolishing Obamacare, Medicare and Medicaid in favor of Health Savings Accounts for all? Really, Gail, I had no idea.

Bret: Actually, I’m betting we’ll even find some middle ground on that one. America needs a successful Biden presidency, and that means conservatives are going to have to learn the art of compromise all over again. That goes for me, too.

Gail: Hey, we may not be able to host the usual Thanksgiving, but at least the holiday spirit lives on in our conversation!

The Times is committed to publishing a diversity of letters to the editor. We’d like to hear what you think about this or any of our articles. Here are some tips. And here’s our email: [email protected].